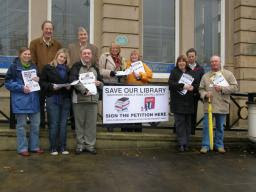 It looks as if the Liberal Democrat fight to get a temporary town centre library, while the current one shuts for refurbishment for as long as three years, could succeed.

We strenuously challenged the Tory-Lab unpopular decision not to provide a temporary town centre library and used a seemingly endless series of council procedures and meetings to try and get it reversed.

Eventually, the force of our 7,000-strong public petition and our constant pressure, made the three Conservatives on the ruling cabinet - Brenda Porter (Southport), Paula Parry (Blundellsands) and Barry Griffiths (Formby) - change their minds and agree to have the subject looked at again. Success !

Lib-Dem councillors refused throughout to accept that there were no suitable town centre premises and, frustrated by the seeming lack of council officer interest and initiative, we carried out our own property research and investigations.

This led us to discussions with the Southport Visiter which we rather thought had space at its Tulketh Street offices and, finally, contact with the paper's property team for confirmation that a deal was realistically possible.  We then passed the information, and possible costings - again based on our own forensic research into the council budget - to Sefton officers for action and completion of negotiations.

At this stage the Visiter project looks to be the front-runner, certainly from a financial point of view.  Other properties which officers have put into a report on the subject are either far too small or expensive.

This report will be considered by the ruling Cabinet meeting next week at Southport Town Hall on Thursday 4th March.  It's open to the public. Everything hinges on how the Conservatives vote.

The real tragedy is that so much time has been wasted getting a change of heart.  Formal things, such as getting planning permission, and the fitting out of the premises, will mean that it is likely to be some months after the current library closes before a replacement is up and running.
Posted by Your local councillor team: