A Lib Dem team from Southport and Hightown braved the bitter winter weather to help Elwyn Watkins, beaten by Labour's Phil Woolas by just 103 at the general election, win the Parliamentary seat at a by-election expected early in the New Year. Disgraced former Labour Minister Woolas has lost his bid to overturn  High Court judges decision removing him from parliament for lying about his Lib Dem opponent Mr Watkins.

Seeking refuge from the cold and for suitable liquid refreshment in a local pub, the team sat down only to find the most appropriate picture hanging above them on the wall. None other than the "old man" himself - the  legendary Liberal  Prime Minister William Ewart Gladstone. 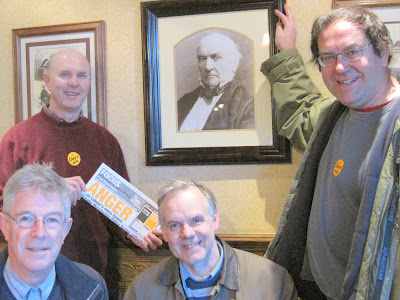 Posted by Your local councillor team: