A public meeting has been called as part of the campaign to save Churchtown Library from closure. The meeting is on Thursday 29th November at 7pm and is being held at St Cuthbert's Church Hall, Botanic Road in Churchtown (next to St Cuthbert's church).

The meeting has been organised by councillor Nigel Ashton, who represents Churchtown.  Cllr Ashton said "This meeting has been called to let members of the public have their say. I hope as many people as possible will come along in support of Churchtown Library." 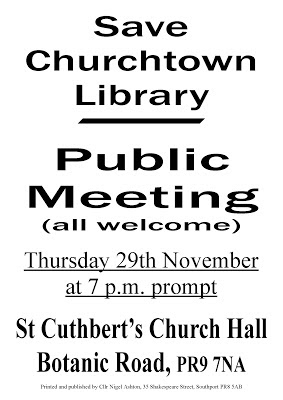 Cllr Ashton added "There has been a tremendous response from people throughout the area who want to save their local library. Hundreds of local residents have already signed the petition to keep the library. Most of the shops in Churchtown have taken petition forms for their customers to sign, and local schoolchildren have been organising their own protests."

"I also urge everyone to take part in Sefton Council's official consultation on the library proposals. The consultation can be accessed online through Sefton's web site and consultation forms are available from libraries and the Town Hall."