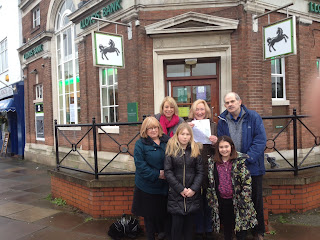 A trio of Lib Dem councillors have launched a campaign to prevent the planned closure of the last traditional British bank in Churchtown.


Customers of Lloyds Bank have received letters informing them that their branch will close in May following the November closure of the nearby NatWest branch.

Cambridge Ward representatives Councillors Pat Keith and Sue McGuire together with Meols Ward Councillor John Dodd have started the campaign and visited the branch to talk to customers about the impending closure.

“Churchtown is a bustling area for shops and businesses and is attracting new ones all the time yet we learn of another bank branch closing its doors,” said Councillor Keith. “This would be a massive blow to the area and we must try to fight this plan and force the decision to be overturned.”

Councillor McGuire said:“This trend of bank closures in areas like Churchtown is extremely worrying and particularly hits elderly residents who find it very difficult  to travel quite long distances to use another branch. We also learn that there is now a threat to ATM machines which would only compound this problem.”

And Councillor Dodd said: “ This closure flies in the face of Lloyds mission statement which states: The Group is working to build a  stronger, more responsible business that will stand out by meeting the needs of families, businesses and communities across the UK. In short, the role of Lloyds Banking Group matters. “ The truth of the matter is that once again its profit before people.   I thinks it’s disgraceful.

One of the bank’s customers, Caroline Connolly, said: “I was extremely disappointed to learn of the planned closure.  The effect on my family and I will be significant because it means I will have to travel into the town centre to use the bank which only adds to expense and added time.”

In the letter to customers the manager of the Churchtown branch Damian Galuszka stated: “After a recent review of how customers use our branches in the Southport area we have made the decision to close the Churchtown branch. From May 23, 2017 onwards this branch will be closed I’m sorry for any inconvenience this may cause.”