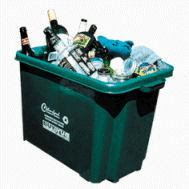 Mainly because of the weather, there were delays in parts of Churchtown over the Christmas and New Year period. There was a cumulative backlog because of the pre-Christmas ice and snow which led to the suspension for a period of recycling collection by the private company that conducts the service for the council due to unsafe working conditions for their staff. But wheelie bin collection continued, although it took longer because of the ice.

As a result of the backlog, the green recycling box collection was not completed everywhere in our area on Christmas Eve, but wheelie bins were reportedly emptied in all our area roads in the week leading up to Christmas Day. This was in spite of a nasty accident when one of the crew slipped on the ice while handling a bin and seriously injured one of his fingers and had to be urgently taken to Southport hospital and later taken by ambulance to Whiston hospital for specialist treatment. Rounds then had to be re-jigged.

Extra recycling vehicles were put out immediately after theNew Year public holiday specially to mop up on Monday 4 January to deal with backlogs and to cope with the usual huge increase in bottles, cans etc to be collected, but still some roads were not completed.

With the snow throughout the North West on Tuesday 5 January, all the Merseyside councils suspended entirely their refuse collection operations in the morning - with the exception of Sefton, although there was no wheelie bin service in some parts of the borough (e.g. Maghull) where the snow was a particular problem.

Latest information (5 Jan) is that refuse and recycling is going to be increasingly affected if the bad weather continues.  A serious difficulty is getting rid of the refuse.  The council vehicles just collect refuse. They take the waste to the "tip" at Foul Lane, which is run by Veolia, the company that is responsible for onward disposal of the refuse at a landfill site in the Warrington area where access is a serious problem because of the weather.

Refuse that cannot be got rid of because of difficulties at the landfill site is piling up at Foul Lane and because of this there is severe congestion there that has meant Sefton collection vehicles having to wait for very long periods to unload before going out again to empty more residents bins. Worse still, we are told that Foul Lane is almost full and cannot take much more. The council faces the prospect of having refuse vehicles full of waste that they cannot unload at Foul Lane.
Posted by Your local councillor team: