Our long-running fight to get a temporary home for our town's central library has been won !  It's going to be in spacious spare space on the ground floor of the Southport Visiter offices. This was agreed by councillors on Thursday 4 March, after a Conservative and Labour change of heart.

Back on November 12th  last year the Conservative and Labour members on the ruling Cabinet voted against  providing a replacement library while its current home in the Arts Centre complex is closed for up to three years for a £15 million modernisation.

They rejected pleas from the Liberal Democrats for the council to continue trying to find a suitable site. They voted firmly against having a temporary library and stopped any further council searches for a site.  As they are now trying to re-write history, here's the actual decision they took :

OFFICIAL COUNCIL MINUTE: CABINET MEETING 12 NOVEMBER 2009
That:
1. The services and staff at the Southport Central Library be relocated at the Churchtown, Birkdale,and Ainsdale branch libraries at no additional cost, during the period of the redevelopment of the Southport Cultural Centre;
2. The Leisure Director submit a report to the Cabinet on the feasibility of providing a temporary IT service for library users in the Southport One Stop Shop.

That was it - no temporary library. But the Liberal Democrats refused to take no for an answer. We used a complicated pattern of procedural rules of the council to challenge this decision at a series of committee meetings leading up to a critical meeting of the Southport Area Committee on 6th January.  This is a meeting of all 21 Southport councillors.

Lib-Dem councillors put forward a formal  resolution demanding an affordable replacement town centre library and for council officers to continue searching. This was supported 100 per cent by our councillors.  All the Conservative councillors, including Councillor Brenda Porter who is a cabinet member, sat on their hands and did not vote. So much for fighting for Southport ! 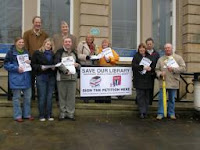 Our successful resolution went to the January 14th Cabinet meeting - the last opportunity to get the Con-Lab "no temporary library" decision reversed. Faced with a 7,000 signature petition, which we and supporters had raised in the bitterly cold weather, the Conservatives did a surprise U turn.  They changed their minds and, at last, agreed to allow further work to go ahead on finding a town-centre building.

We had kept the ball rolling throughout and carried out our own research, which included the Visiter building, and made the first initial contact with the newspaper's Liverpool-based property services manager, passing our findings and possible costings on to council officers to carry out detailed negotiations. Unlike others, we did our homework - and didn't give in.

The Southport Visiter Editor said in his column (Fri March 5): " The Liberal Democrats played a key role in keeping the issue alive when it was in danger of terminal illness."

John Pugh MP said:" This is a huge victory for people power.  Congratulations are in order for those who fought for a solution and didn't take no for an answer."

Sadly, the Conservatives are now trying to spin the line that they were in favour of the idea all along.  The facts and their votes (or in one case at the critical  Southport Area Commitee their non-votes !) prove otherwise. The delay resulting from their negative decision-taking and lack of vision means that it will be June at the earliest before the "Library at the Visiter" can open. The library is due to close in mid-April.

From the beginning we have tried our best to get a temporary library.  We first suggested using part of the vacant space in the Market Hall.  This would have increased the footfall for the market traders and the council would have been investing money in its own property.  The council came up with some extortionate estimates of the cost which we did not agree with. This is not unusual and we disputed the detail.

Our own research indicates that it could have been adapted for at least half the cost they quoted.  A nett figure of £250,000 or less would be realistic (we found out that the council's budget for annual running costs of the town centre library is £54,550 which would be available for a replacement)  But our idea was rejected by Tory and Labour votes. They have agreed together to spend £3.3 million on a modern "Harrods Food Hall" re-vamp of the Market which we do not support, preferring a more modest refurbishment which would have kept rents affordable.  Only time will tell who has made the right decision.
Posted by Your local councillor team: