I Support Southport, Lancs - Thanks

The Boundary Commission for England have issued draft proposals to make all Parliamentary constituencies roughly equal in size.  This requires Southport constituency to be expanded, which could be done in one of two ways. 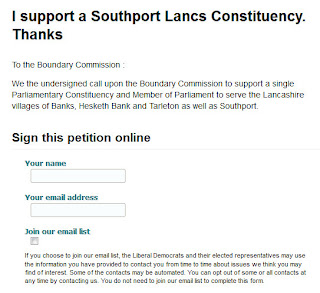 One way would require adding on half of Formby, splitting Formby in two for the first time in its history.  Not surprisingly, the people of Formby seem generally to be unhappy with this idea.

The other idea would be to rejoin Southport with its historic Lancashire hinterland - the villages to the north and east of our town whose people mainly work and shop here and who have already been taken out of the West Lancashire constituency.

Southport newspapers circulate in this area and, not surprisingly, some residents of this area already initially contact the Southport MP, rather than the South Ribble MP.

Coupled with our Southport Lancs MP proposal is an idea to allow the whole of Formby to be re-united with the Ormskirk constituency in which it was placed for most of the past hundred years. Please note that having a shared MP would IN NO WAY affect the pattern of local government provision in the area.

Residents of Southport, Banks, Hesketh Bank, Tarleton etc, have until 5th December to make their views known. You can help us send a clear message to the Boundary Commission by signing our "Southport Lancs MP" petition either online or by downloading a printable copy.

The campaign to have a new Southport constituency including parts of Lancashire has been supported not only by the Liberal Democrats and John Pugh MP, but also by the Southport Area Committee and the Southport Party. Parish Councils throughout the neighbouring areas are also being asked to consider supporting the proposals.

This article first appeared on the Birkdale Focus blog